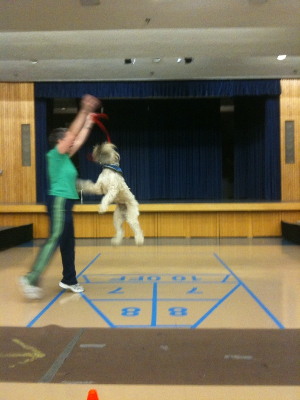 Obedience training usually refers to the training of a dog and the term is most commonly used in that context. Obedience training ranges from very basic training, such as teaching the dog to reliably respond to basic commands such as "sit", "down", "come", and "stay", to high level competition within clubs such as the American Kennel Club and the Canadian Kennel Club, where additional commands, accuracy and performance are scored and judged.

Obedience implies compliance with the direction or command given by the handler. For a dog to be considered obedient rather than simply trained in obedience, it must respond reliably each time the command is given, by what is commonly known as its handler. A dog can go through Obedience training and not be obedient. If a dog is referred to as being Obedience Trained it should comply immediately with every command its handler gives. In the strictest sense an Obedience trained dog is an obedient dog. 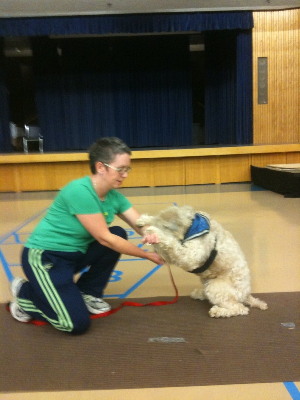 Training a dog in obedience can be an ongoing and lengthy process depending on the dog, the methods used, and the skill and understanding of both the trainer and the handler. The level of obedience the handler wishes to achieve with the dog is also a major factor in the time involved, as is the commitment to training by the handler.

Obedience training is often a prerequisite for or component of other training. The actual training of the dog can be done by anyone, the trainer, owner, or a friend. Typically the individual who is caring for and living with the dog participates and trains the dog, as they will be the one who will be giving the commands. The relationship and trust between the dog and handler are important for success.

Basic or beginner's obedience is typically a short course ranging from six to ten weeks, where it is demonstrated to the handler how to communicate with and train the dog in a few simple commands. With most methods the dog is trained one command at a time. Though there may or may not be a specific word attached to it, walking properly on a leash, or leash control, is often the first training required prior to learning other commands.

above, Luna is a Wheaton Terrier, with her owner Lori. When challenged to teach her puppy a High Five, Lori went one better - she taught Luna a High Ten (both feet and hands touching)!!


About The Breed
General Facts | Breed History | Raising Your Dog